Enter your email address, and we'll keep you updated:

Ireland mistreats it's own children!

Ireland has long been known as the land of 'Saints & scholars'. We have been proud of our education system for a long time, and to question that orthodoxy is to invite criticism and ire.

But our system is a long way from perfect.

Ireland has an unusual education model, especially at primary level, compared to our neighbours. Although the State pays for everything, an outside party controls most of the National School system.

Ireland then takes a hands-off approach, until problems are found, by which time citizens have already been disadvantaged. Even access to the education system can be barred by the religions who are the bodies that run the majority of the schools. If children get in, they are indoctrinated into the Roman belief system.

The indoctrination is permitted by the presence of Rule 68 of the Rules for National Schools. That says things like "of all the parts of a school curriculum Religious Instruction is by far the most important".

Science, language, music, art ... so many subjects that children cannot be themselves without, and religion is top of the heap. And that still applies in 2015.

Of 3,277 of all types of primary-level schools, 2,944 are run by one religion: the Roman Catholic Church. That's 90%. If the special schools are removed, the percentage is even higher.

Because of Section 7.3(c) of the Equal Status Act, that religion feels it is entitled to discriminate against Irish children, and the Irish State does nothing. It is offensive to reason that such discrimination in a vital part of the system should be permitted by something called an Equal Status anything!

Ireland is regularly condemned by the UN and Human Rights organisations for this, but most Irish people until recently didn't know this went on at all. Many still don't.

The Minister for Justice and Equality could do something about this. But she hasn't.

The Minister for Education and skills could do something about this. But she hasn't. The has recently stated that she will annul Rule 68, which is to be welcomed, but that hasn't happened yet.

Our objective is to name and shame, and to identify among those seeking election the candidates who we should not vote for because they support this discrimination.

There is huge resistance to change in our political system; too many people feel they have something to lose.

But here's the thing: why would anyone fear equality, unless they themselves benefited from the inequality?

Now is the right time to question your TD, to ask your senatorial candidates what they're going to do about this. Now is the time to ask, because experience has taught us that after the election is too late to expect some politicians to commit to doing the right thing. If they later renege on the promise, we'll deal with that then.

For now, state your intent to Vote for Equality, and grill your candidates closely!

NOTE: Unless you are a graduate of NUI, you'll have to grill Seanad candidates indirectly through your local councillor. That's because there's even inequality in the treatment of voters in Ireland. 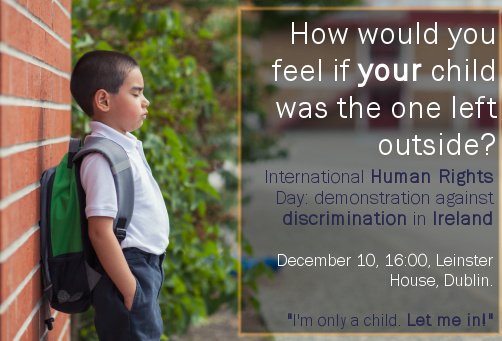